Heading our team is the wonderful Show Champion Glenbrows Picture This JW Sh CM, Luka has had a dazzling show career from the offset, winning to date 15CC (11 with BOB) 12 res CC and Best in Show many times, including the Welsh Springer Spaniel Club x2 and the WSSC of South Wales Championship Shows 2011. Here we present a selection of his winning moments, commencing with Best Puppy in Breed Crufts 2009. 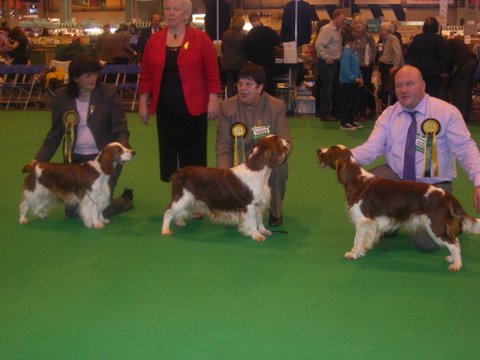 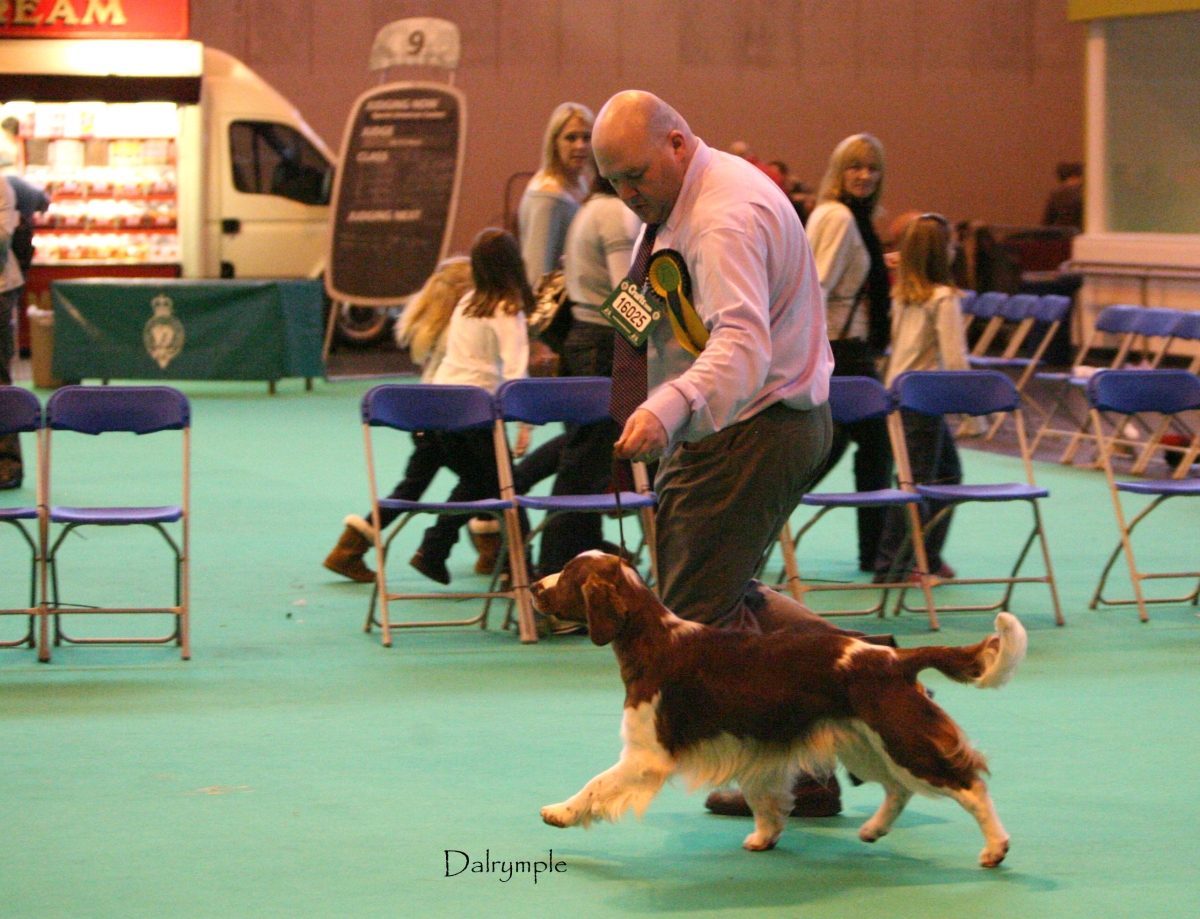 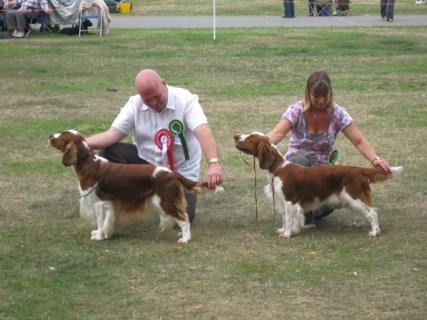 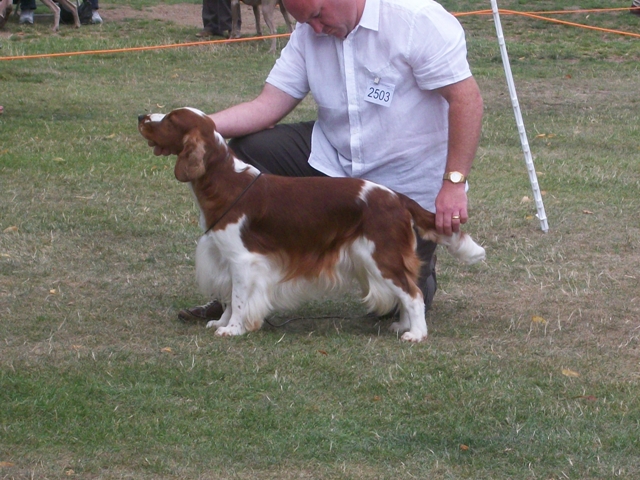 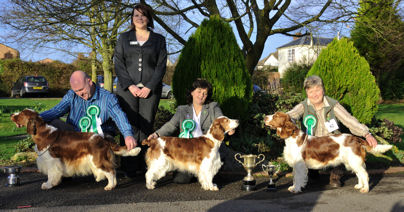 In 2012 Luka was awarded ResBIS at the WSSCSW Championship Show, and his daughter Glenbrows Poetry was declared BP in Show 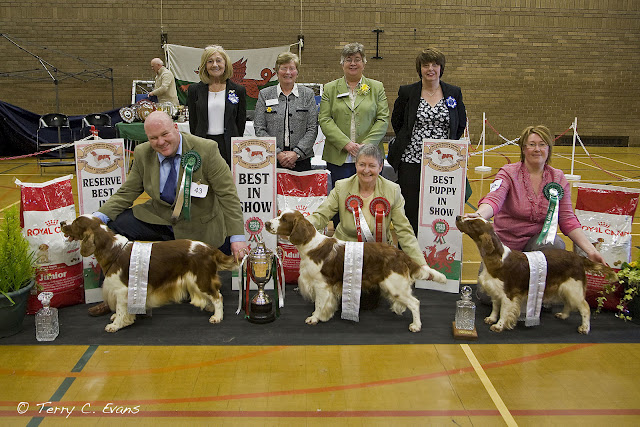 his veteran carrer begins with best veteran in show! 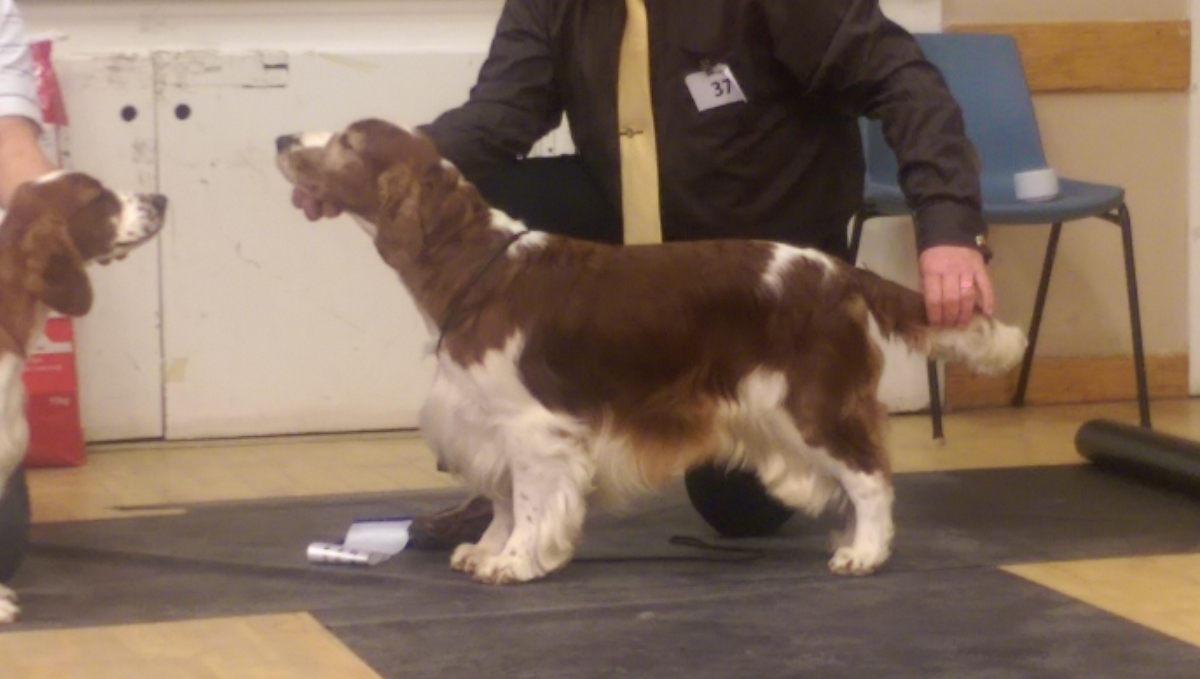 His son, the stunning  SHOW CHAMPION GLENROWS TIMELORD JW Sh CM, Best of Breed winner Crufts 2012 and 2013, all of Theo's qualifying CCs were awarded with Best of Breed, and all by breed specialists;  He is litter brother to our beautiful Sh Ch G Tribute 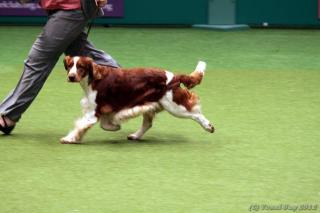 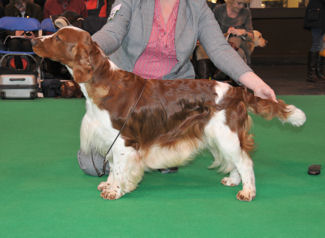 Both of the above photos are untouched, showing Theo in the show ring Crufts 2012

Our next home bred male Sh Ch Glenbrows Rainman JW, his mum is G Past Magic, the litter sister to our wonderful Sh Ch G Picture This. At only 8 month old, Tom has collected some fine wins already, including Res BPIS and BPIS at two club shows, he loves the ring, just like his famous uncle! Sired by Sh Ch Nyrilam Blazing Star JW ShCM, Tom brings some useful new lines for us, as well as some familiar ones through Star's mum, the very beautiful Sh Ch Arkview Secret Affair. Tom is pictured her at 8 months old

Thomas completed his Junior Warrant in fine style, being awarded his first ResCC from Puppy and leaving his puppy career as Top WSS Puppy (june13). He has been health checked accordingly, holds a clear eye certificate and his hip score total 12. The following photographs of Thomas are him at 11 months old, many thanks to Laura Wilcox for capturing him from the ringside! 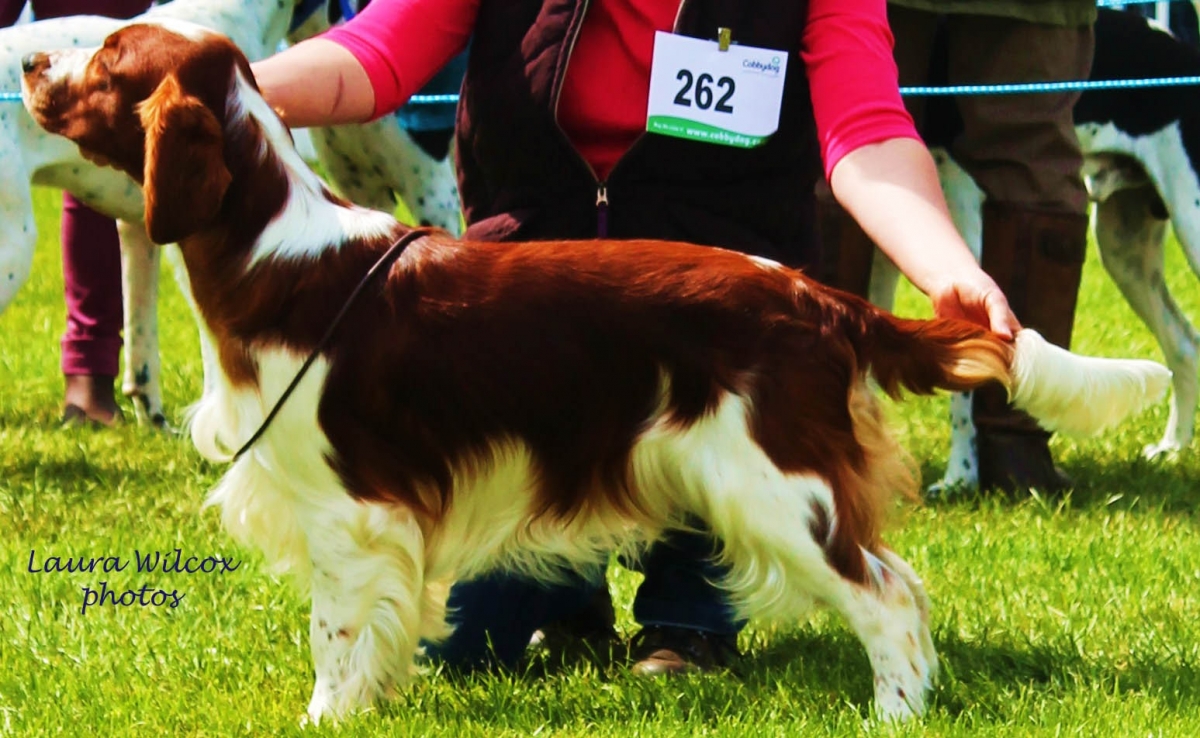 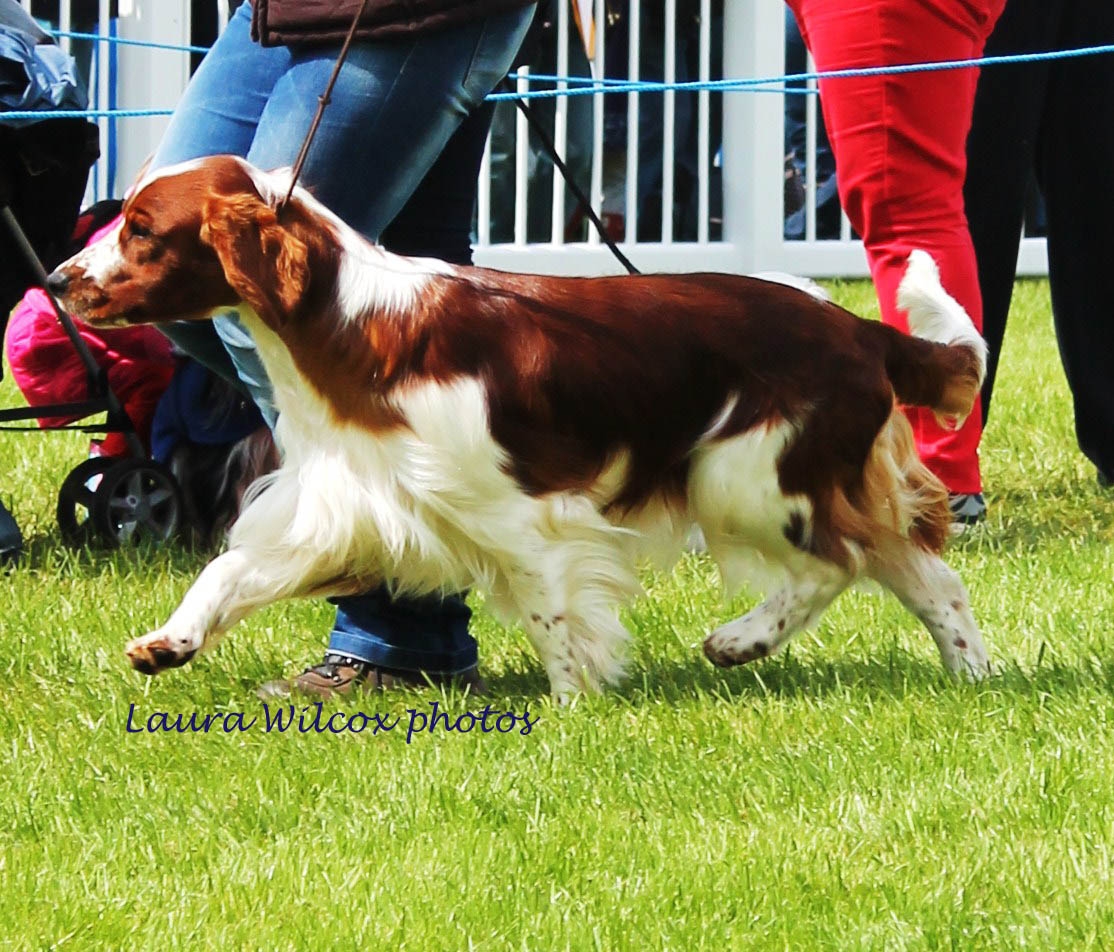 At not yet 2 years of age Thomas became Sh Ch Glenbrows Rainman JW, all CCs awarded with BoB too . t

Tom was joined in the ring June 2014 by his half brother Glenbrows Manifesto JW, Bobby has had some wonderful wins and we look forward to the future with this young male! Bobby is confidently offered at stud to suitably approved bitches. He holds ( as do all our dogs) a clear eye certificate and has a hip score of 9. His first puppies look very promising and have inherited his complete love of live, now winning well too!

Bobby, Border Union June 2014, his 1st show ring appearance . Bobby comleted his JW in 12 weeks. He is now enjoying the Swedish hospitality of Kennel Twinkle and our good friend Per Aschan, his co-owner and is known as Swedish Champion Glenbrows Manifesto JW

Glenbrows Trademark JW, handled by Daniel to BPIB at SEWSSC Championship Show, Midland Counties Championship Show & GBAS (as in the photo) Championship show. Marcus has completed is Junior Warrant with ease, pictured here captured ringside, Crufts 2015 on his way to winning the class! 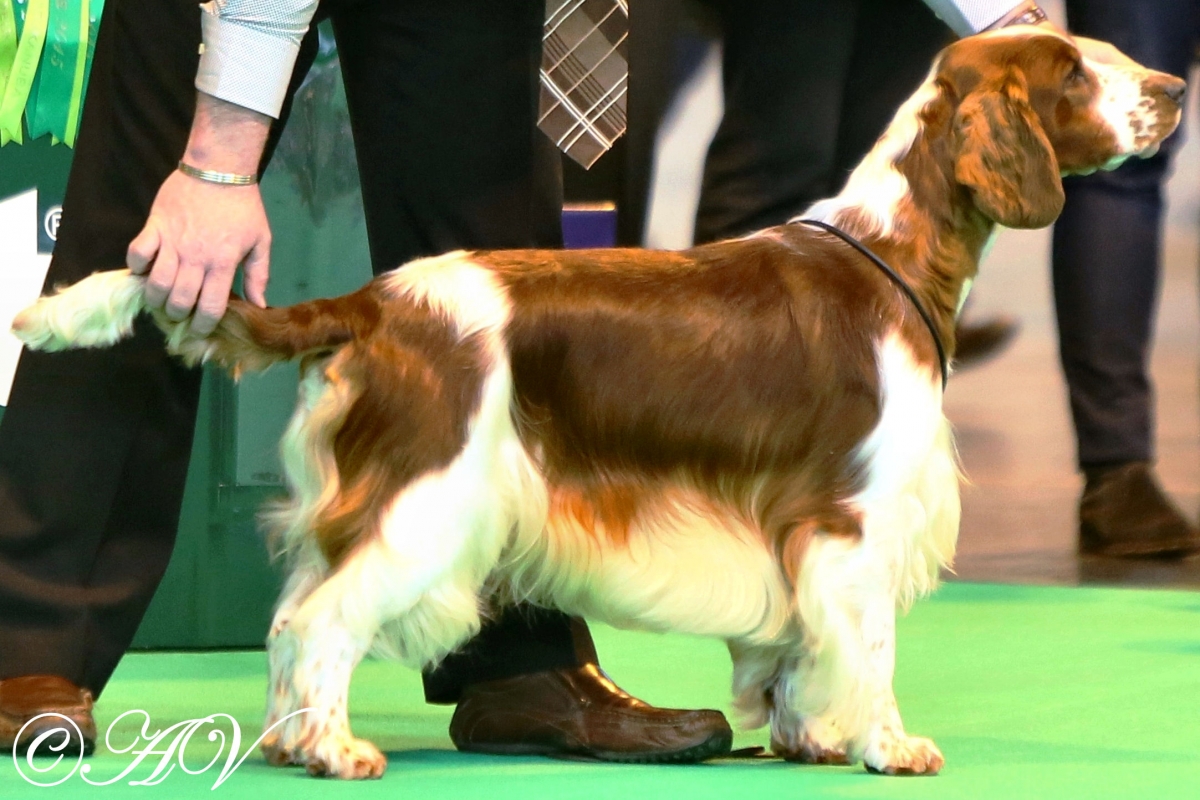 Super day for the Glenbrows boys at the WSSC South Wales Club Show, September 2015, judged by International Gundog Specialist Pam Blay, Trademark was awarded Best in Show and his granddad, Sh Ch Picture This Best Veteran in Show and res BD behind his grandson! 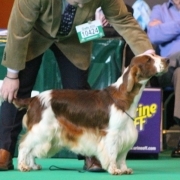 Marcus is now known as Sh Ch Glenbrows Trademark JW, currently the holder of 5CCs & 3 res CC. Shown on this video, having been shortlisted in the Group, Richmond 2016 following the award of his 5th CC and Best of Breed.

Marcus has been joined in the ring by our latest son of Sh Ch Picture This, Glenbrows PIcture Me Now JW; Freddie. Freddie created his own piece of brred history by being awarded his 1st CC at only 8 months of age, the youngest ever WSS to be awarded a CC. This win has been follwed by many more. He is shown here winning Best Puppy in Show @ WSSC of South Wales Show, March 2016, and again at Crufts 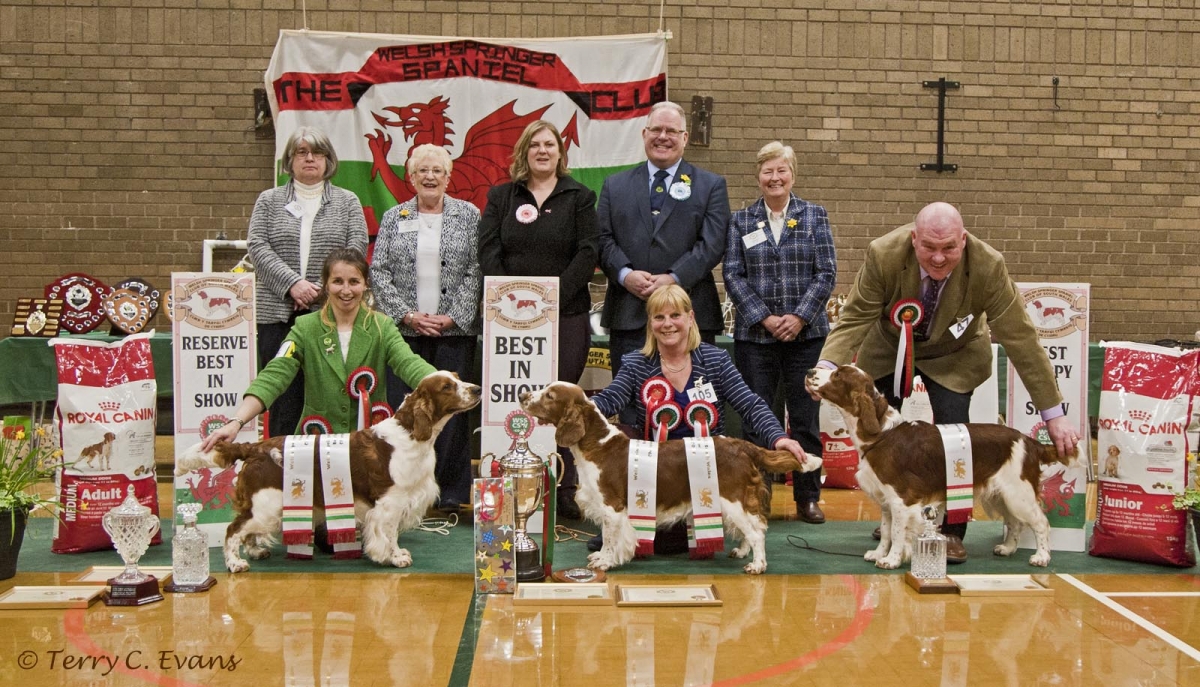 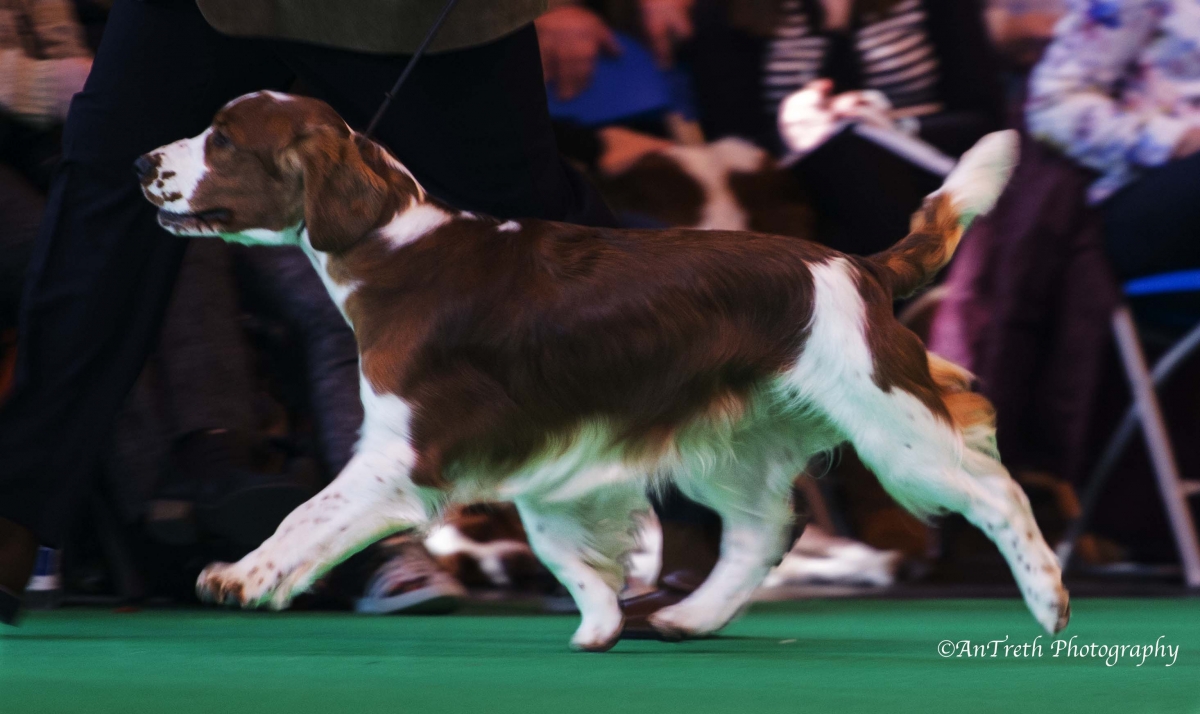